Much of the fresh produce is grown in Eden Valley and on other farms across Buffalo Niagara and Ontario.

Hospitals have long focused on preparing and serving healthier food to patients. What’s new is the uptick in homegrown, locally sourced produce – akin to the “Farm to Table” push in schools and restaurants.

And it’s been a particular focus on the Buffalo Niagara Medical Campus, where the nonprofit that coordinates hospitals and other organizations on campus launched a “Farm to Hospital” initiative to explore how to bring more fresh produce into campus health care facilities.

“It’s certainly an industry trend that is growing,” said Christina Dibble, Roswell Park director of food and nutrition services. “I think that the program is only going to grow and become more robust. This is what people are looking for. There is a focus on the food being healthier, a focus of supporting your local vendors.”

The “Farm to Hospital” push to make fresh, local and sustainable food a focus at facilities on the Medical Campus is in its infancy. But momentum is building. 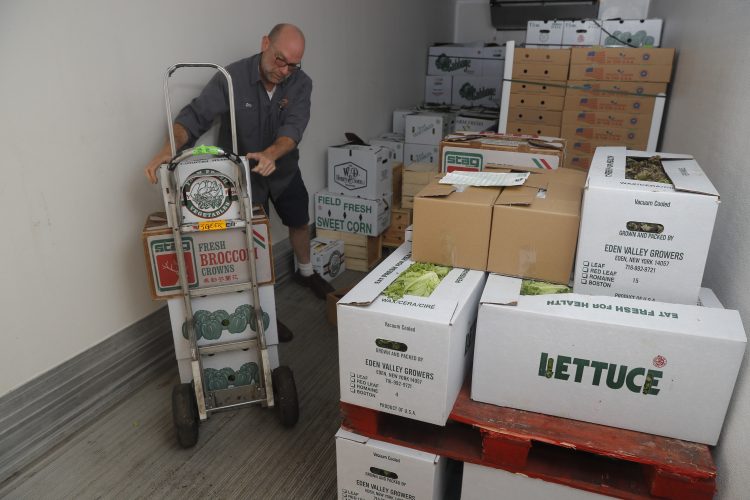 At Roswell Park, menu offerings at the cancer center’s Sunflower Cafe and cafeteria have integrated more fresh vegetables and fruit. Ratatouille earned itself a spot on the cafeteria menu recently, and homegrown asparagus was an early summer constant.

“We thought this was a perfect opportunity to bring this to the Medical Campus. We thought hospitals would be the next logical step,” said Jonathan McNeice, director of healthy communities for Buffalo Niagara Medical Campus Inc. “I think it’s encouraging that Buffalo is being a leader on this. We’re excited this is taking root in Buffalo.”

The timing is ripe in the health care arena, but many say it will take time to implement it on a broad scale on a campus where facilities have varying means of buying food.

As a one-year, $25,000 U.S. Food & Drug Administration planning grant winds down, BNMC Inc. hopes to secure a $350,000 grant that would substantially boost the initiative. The money would be used to help hospitals add training and new equipment, as well as to tap national experts to help the initiative campuswide.

“We don’t expect this to be a quick transformation. We came into this not looking for quick wins,” McNeice said of the effort that began in 2015.

‘Embedded in our culture’

If BNMC receives the grant, McNeice said it would be “full speed ahead.” “We’re all in this together, trying to figure it out,” McNeice said.
Organizations on the Buffalo Niagara Medical Campus have been closely watching the University of Vermont Medical Center.

In Burlington, Vt., the university’s medical center is a model of sustainable health care food service in the country. Its decadelong effort won it acclaim in the “Oscars” of food service with the 2016 Silver Plate Award from the International Food Service Manufacturers’ Association.

With six eating facilities in its complex, it was recognized for top health care food service in the United States.

“It’s embedded in our culture,” said Diane Imrie, UVM Medical Center’s director of nutritional services. “We’ve just changed our culture in that sustainability is a decision point in anything we do, and we have a very strong farm partnership network.”

Fried foods no longer are served. Patients order what they want, when they want. The center’s Harvest Cafe for visitors and workers serves fresh, organic items, as well as local beef, chicken and turkey that is mostly raised without non-therapeutic antibiotics.

“We still use some frozen corn and peas, but it was grown locally,” Imrie said. “It’s our commitment to our community. You could be an employee today, and a patient, tomorrow.”

A garden atrium that serves as a healing space for patients features items from suppliers to UVM’s sustainable food program. The atrium has direct access to the hospital’s rooftop garden, where raised garden beds feature fruit trees and herbs. Produce from the rooftop garden is used in recipes served at the cafe.

Roswell Park’s Dibble was impressed when she toured the University of Vermont Medical Center last fall with a team from the Buffalo Niagara Medical Campus. “We definitely walked away re-energized,” Dibble said.

Imrie chatted with the Buffalo contingent on the rooftop garden.

“A program like this does not hwp-contenten overnight,” Imrie said. “It just takes some passion, and some focus and some commitment. And celebrate the small successes.” 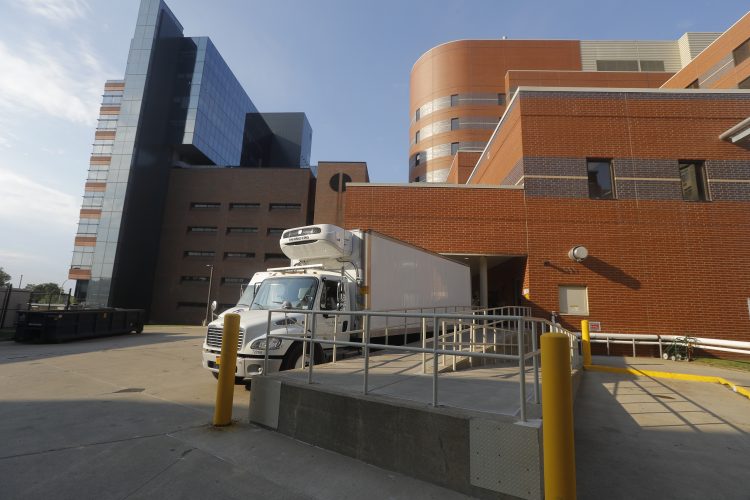 Getting to know the farmers

The biggest take-away for the Buffalo team was the direct link with farmers.

“They spoke with the farmers weekly and took staff out there every year for visits. They started taking pride in sourcing locally,” McNeice said. “It also allowed them to purchase more efficiently and at a better price point because they knew who had an extra crop at a certain time, and were just a phone call away. They were also very flexible in designing their menu, knowing if a farmer had extra of a certain crop.”
McNeice said the “University of Vermont set the bar high.”

“They weren’t 100 percent purists. … It’s all part of their culture,” he said. “They wanted their staff to get engaged and get their hands dirty in growing food. It was a great experience.”

In July, 21 percent of produce used at Roswell Park came from local farms. By summer’s end, that number is expected to hit 30 percent.

“This is a starting point,” said Linda Leising, Roswell Park’s senior clinical dietitian. “We’re hoping to transition it to the room service menu, though it can be somewhat of a challenge to do locally grown vegetables year round. The Chef’s Choice is the ideal launch for us to use locally sourced produce.”

The effort is not without challenges. Patients have dietary restrictions. Fresh produce can require more labor-intensive preparation and can be more costly, including the expense of additional equipment.

Dibble said the medical center has to take cleaning and prep time into its food service planning.

“Last year, we brought cases of local corn in and somebody had to husk it. In order to do that, we had to schedule somebody for a couple of hours,” Dibble said.

While bringing in fresh produce does have added expenses for equipment, staff training preparation, Dibble said “it’s been totally worth it in terms of the nutritional benefits and the positive feedback from our patients, visitors and employees.”

For instance, Dibble said, lettuce can be bought cleaned, in a bag, ready to go. If you implement all fresh lettuce, it must be washed, cut and chopped.

“We have a lot of accommodations in place, and you want the right equipment to steam that produce so you can retain the nutrients as opposed to just boiling it where all the good stuff just vapors away,” Dibble said.

Changing how medical institutions buy their produce, however, can take time to change because of procurement contracts.

It’s easier for a medical center such as Roswell Park to get started because its food service is “self-operated,” McNeice said. Other facilities contract with outside companies.

“Sodexo is very excited to work with McNeice and BNMC to drive this program so that it replicates what we do in other major markets,” said Todd Zimmerman, a health care district manager with Sodexo, with whom Kaleida contracts.

In the end, it boils down to balance, McNeice said.

“Wouldn’t it be great,” he wondered, “if neighborhoods like Allentown and Masten came to the Medical Campus to eat?”